Just before the Christmas holiday break, my dear friend Veronika CH pointed me to the news about the winner of the ‘Name of the Year in Academia’ award handed out by the university newspaper Khrono. While many have already written at length in response to this ‘debate’, I want to contribute by writing something in English so that more people whom the debate is actually about might be able to follow along and contribute. I am doing this on my personal blog because this post will reflect my personal opinion and I don’t necessarily want to give Khrono even more clicks and views on this.

The national newspaper of universities in Norway, Khrono, is no stranger to posting controversial opinion pieces. It is generally also where I get my news on what’s happening in Norwegian academia, for example, on the ridiculous two sensor rule. Earlier this year though, they posted something which was straight up inflammatory. I am going to do my best to translate what Cecilie Hellestveit wrote:

The foreign researchers do not know the Norwegian society and are not here to invest in it. They are here because they did not get a job at the most prestigious universities yet. Some fields are so dominated by foreign researchers that there are barely any Norwegians left among the employees. What is the point of research which not first and foremost has the Norwegian society as a starting point?”

There is a lot to unpack here and this statement obviously attracted many responses, mainly speaking against such views. However, when was time for an all-Norwegian jury to pick the award winner for ‘Name of the Year in Academia’, it went to, drumroll, Cecilie Hellestveit. This again led to many responses, both on Twitter and as subsequent opinion pieces in Khrono. For example, Ingunn W. Jolma and Christian Jørgensen presented excellent opinion pieces in Khrono. Khrono summed up some of the Twitter responses here, both negative and positive. The editor added a piece of her own defending the situation.

I have always felt welcome and at home in Norway. My colleagues, no matter where they are originally from, have supported me and also my endeavors to learn Norwegian. I in fact feel so at home in Norway that I am not considering moving back to the Netherlands after over five years here. I pay taxes in Norway happily supporting the amazing health care system among other things. As I still feel Dutch at heart and the Netherlands does not allow for double passports, I do not want to give up my Dutch passport. This means that I do not get to vote in the national elections.

Still, I consider myself and my international colleagues contributing to research, advancing our science which may also impact Norwegian society, though it does not exclusively aim at that. It is not even true that I am only here because I was not able to get a job at a prestigious university. I think excellent research is done when joining forces with people with many different areas of expertise. Often, this involves collaborating with people outside of our backyard, though this not does preclude collaborating with people inside our backyard.

The statements by Cecilie Hellestveit are offensive to me. This can happen, she is expressing her opinion, just as I am now. I do not think this particular opinion is award-worthy and this is the part that is most hurtful to me. It makes me question how many in Norway hold these views and are applauding the awardee for finally speaking up about these parasitic foreigners taking our jobs, none of them with Norway’s best interests in mind, only here as proper prestigious universities would not take them.

I feel personally attacked and sad for my foreign colleagues living here, sacrificing a lot to be here in the process. On a side note, I applied for the Academy of Young Scientists in Norway and got rejected. As the leader of this organization was on the jury for this award, I now start to second guess the reasons for this and wonder whether I perhaps wasn’t Norwegian enough to partake in this?

The main reason stated for Hellestveit being awarded is that it started an important debate on internationalization in Norwegian academia. However, when expressing your generalizing opinion about a group of people as a means of starting a debate, I think it is only fair to do so in a way where people who are the subject of said debate can participate actively. This can be achieved by doing this in a common language so that everyone can understand and respond if they wish. I hope this blog contributes a little in this regard.

I question Khrono’s motivation in all this. Are they so desperate for clicks that posting inflammatory personal opinions should be awarded to get even more engagement? I realize that this blog too adds more undeserved attention, but I really could not stop thinking about this, even in my Christmas holiday, and I thought writing might help.

To end on a positive note, I am grateful to all those who spoke up against this award process and the views it represents. You make me feel hopeful, respected, and welcome.

I am writing this after an action-packed week co-organizing and lecturing at the first ever international virtual Spring school for biomedical visualization. With this, I wanted to share some thoughts and resources gathered over the week.

Initial thoughts around launching an educational platform for the visualization of biological and medical data were shared at a Shonan seminar on ‘Formalizing Biological and Medical Visualization’. This trip is also known as the last of my travels in the before-times. Then the pandemic hit and everyone had to move their teaching to digital format. We realized that as people moved to digital teaching, we would have an opportunity to bring these lectures together on a shared platform. We considered Medvis.org as such a platform, but did not fit the goal of uniting the biological and medical data visualization communities. To seed our new platform with excellent base content, we landed on planning a Spring School aimed at students and PhD candidates, Bio+Med+Vis Spring. We would host this as a virtual event, due to pandemic restrictions. This allowed us to have a unique opportunity for international lecturers and participants.

Due to the combined networks of the organizers and the online setting, we could to offer a program filled with top international visualization researchers from various backgrounds. As we opened for registration, we were expecting maybe 50 participants to sign up. This would have been fine as the main goal was gathering resources for our platform. Above all initial expectations, we ended up with about 350 registered participants. While this is wonderful and maybe even over what in-person EuroVis draws, this also generates organizational complexity. A regular Zoom room with 350 for example will degrade recording quality as chances are high that someone unmutes or does something strange. Another major goal of a Spring school was to connect people worldwide at all career stages. However, from experience we all know these connections aren’t easily made in a virtual set-up, especially not at this scale.

Here’s what we ended up with in terms of setup:

To wrap this overly long post up, here are my final thoughts on this week. It was incredible to see people worldwide coming together spending their time either giving lectures or listening and participating in the discussions. A lot of the lecturers attended other lectures to learn more about specifics of other sub-fields. I learned a lot about biological data visualization, and I imagine the biovis people learned a lot about medical visualization. Newcomers to the field hopefully learned a ton about visualization in general as well.

While at conferences, I sometimes feel like only a handful are doing biomedical visualization, this event made me feel like we have a lively community and there is a lot of interest from people at all career phases and across disciplines. Though it was very time-intensive, I would do it again in a heartbeat, though not immediately probably :). We have heard so much positive feedback from attendees and lecturers which made the whole thing very rewarding. Thanks everyone!

Here are the resources I lured you here with in the intro text. Note that they are only shared at the very end on purpose to reward patient readers 😀

This did not entirely turn out to be the short blog I intended, but well, here we are! I’m off to enjoy a long Pentecost weekend, I hope you are able to do the same!

Another day, another video interview 😉 This time about medical visualization and computer science in general for the University of Bergen, department of Informatics. Medical visualization is also an active research topic here in the recently established Mohn Medical Imaging and Visualization (MMIV) centre.

The video was produced by Joakim Birkelund, who did an absolutely amazing job with editing and camera-work.

I’m going to go ahead and resist the urge to write about how I did not write for a while. Does this mean I just did? Anyway, I was recently interviewed by Pina Kingman and Eli Ertresvaag for the webpage of the Department of Informatics at the University of Bergen. I think I look super-tense, which is quite amazing considering this is my third video interview already 🙂 Also, it is quite noticeable in the written text that I don’t speak to 10-year-olds on the regular! 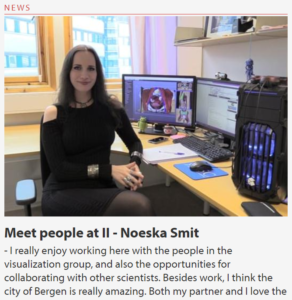 Giving a talk using the Leap Motion for the first time today. Including a live handwaving demo 😉